Welcome to the English Department at the University of Puerto Rico, Humacao Campus (UPRH). We feature a range of courses built upon a tradition of studies in second language learning and teaching to aid students in the development of English as an additional communication medium. This will facilitate their success in the competitive world of employment as well as promote active participation in their communities. Our department accomplishes these by offering service courses to other academic departments, and a Bachelor of Arts degree in English with a Concentration in Elementary and/or Secondary Education.

Did you Know that….

The primary goal of the English Department is to develop highly qualified, efficient and well prepared professionals that will contribute to the social, cultural, and educational development of the present Puerto Rican culture.  Students will obtain an excellent education in the area of English as well as the development of values and their self-esteem.  Our Department aspires, as well, to promote the development of professionals that will contribute towards the achievement of a better quality life for him/herself as well as for the community at large.  Programs and course offerings will be revised continuously to maintain quality academic offerings to meet demands of today’s Puerto Rican society.

The mission of the English Department of the University of Puerto Rico at Humacao (UPRH) is to provide academic courses that will aid students in the development of English as an alternative communication medium.  This will facilitate their success in the competitive world of employment as well as promote active participation in their communities.  This will be accomplished by offering service courses to other academic departments and a Bachelor of Arts degree in English with a major in Education at the Elementary and/or Secondary school levels.

Our mission also includes in-service training to English teachers and other professionals in the eastern area of Puerto Rico.

August 20, 1962 will remain as one of the salient moments in the history of the University of Puerto Rico: 267 students and 22 faculty members initiated one of the most ambitious educational projects ever attempted by the University, the inauguration of the Humacao Regional College. Five academic departments – English, Spanish, Humanities, Social Sciences and Natural Sciences (Physical and Biological Sciences) – received the first group of students representing 15 municipalities in the eastern region of Puerto Rico; namely, Humacao, Las Piedras, Juncos, Gurabo, San Lorenzo, Yabucoa, Maunabo, Patillas, Arroyo, Guayama, Naguabo, Ceiba, Fajardo, Culebra, and Vieques.

The Audio Lingual Laboratory was opened in January, 1963. All students were required to participate in the Audio Lingual Laboratory which was set up to give students practice in oral English as a complement to the regular English courses, and it followed the content structure offered weekly in the other classes. The Honors English Lab was an Oral Interpretation class which exposed students to the reading of oral passages from important literary works such as Shakespeare’s Othello, Hamlet.

Through the years, and as the University evolved from a two year Regional College, a four-year University College and finally to the University of Puerto Rico at Humacao, the English Department has grown in number and complexity. In 1967, English business communication courses for the Business Administration and Secretarial Science Associate Degree programs were added to the course offerings to satisfy their English requirements. Up to 1976, the department offered the first two years of the bachelor’s degree transfer programs from UPR-Rio Piedras, and the service courses for the various associate degree programs that were implemented after 1967.

In 1976, a new page in the history of the department ushered in the Bachelor of Arts Degree in English, with a concentration in Elementary and/ or Secondary Education. Hundreds of teachers working in Puerto Rico and in the United States have graduated from our program, including faculty members of our department. At the present time, the department has nine full time tenured faculty members plus 11 adjunct faculty for a total of 20 faculty members. This is a long way from  the four professors who began in 1962. The department offers English concentration courses in English education, literature, linguistics, methodology, and clinical practice teaching.  It also offers general education English courses and business English courses as a service component for students in other UPRH programs.

In 1985, the English Students Association (ESA) was born. The purpose of the ESA is to promote the use of English as a second language through various activities such as seminars, conferences, field trips that serve as forums for expression in English.

In April 1986, the first Shakespeare Festival was hel. This first Festival was a recital, presented by Prof. Oscar Rodriguez, that included the reading of some of Shakespeare’s sonnets and the dramatization of soliloquies. The English Department continues to present this festival during the second semester of each academic year with the participation of students, faculty members, and visiting performers and lecturers. The festival has included lectures on topics dealing with Shakespeare’s literary production, discussion panels, presentations of Shakespeare’s plays, recitals that have included poetry readings and the dramatization of selected scenes from Shakespeare’s plays. The festival has broadened its scope to include literary works written by other renowned writers about, or related to, Shakespearean literature.

In 2009, the department welcomed its first Professor Emeritus, Prof. Oscar Rodríguez. The UPR Academic Senate recognized the contributions of Prof. Rodríguez as a founding member of the English Department, his invaluable contributions to the education of students in the eastern regions of PR, and in his selfless contribution to the community.

A second student association, the Creative Writing Workshop (CWW), was established in 2013. This association provides opportunities for students to showcase their original short stories, essays, poetry, and other original works as well as engaging in community service activities.

The following is a list of English Department directors since 1962: 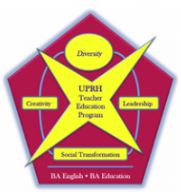